How to Manage Social Distance in Global Teams

Global teams are especially susceptible to becoming emotionally disconnected, what I term “social distance.” That’s because geographic distances, cultural diversity, and linguistic differences make it more difficult than not for team members to remain connected. And becoming emotionally disconnected is an important problem–perhaps the most important problem–for global workers. Studies show that the Number 1 factor that determines the success or failure of global teams is how they feel about one another.

Below are some common contributors to social distance between global workers, along with suggestions for how to manage them.

Us vs Them Dynamic

There are a number of ways to manage problematic subgroups and the “us” versus “them” dynamic that produces conflict, task coordination, and miscommunication. Most of these skills focus on building and playing up group-level identity: the umbrella identity that binds the team together into one, rather than a fragmented, entity. It’s not the “Indian team” but the “tech engineers in Mumbai.” It’s not the “big team at headquarters,” but “the marketing group.”

Regardless of function—e.g., marketing or design, each team member represents the team. Leaders must be sensitive to cultural and linguistic differences and look for ways to bridge them and build unity. For example, a manager in Dallas, Texas, inherited a large group in India as part of an acquisition. He made it a point to involve those employees in important decisions, contact them frequently to discuss ongoing projects, and thank them for good work. He even called team members personally to give them their birthdays off. His team appreciated his attention and as a result became more cohesive.

Similarly, leaders can recognize individual strengths. Celebrate Sally in the UK for going the extra mile on the latest project. Thank Chati in Thailand for his flexibility in scheduling meeting at times that were less than convenient for him.

To avoid an “us versus them” dynamic, leaders must emphasize the common purpose that team members are trying to achieve for the firm. Leaders must understand and communicate that each person, no matter his or her background, will help the team reach that goal.

Time zone differences, although they seem relatively simple, can create problems and resentments. Leaders need to be sensitive if a call that is scheduled to be convenient for some team members happens to occur in the middle of the night for colleagues across the globe. In addition to interrupting sleep, calls scheduled after business hours can cause problems for employees who do not have Internet access at home. Time zone differences also affect how and when to use instant messaging for communication. For a decision made in real time on a group chat may exclude those in some time zones.

When people work in the same place, casual conversations that take place spontaneously about, for example, upcoming holidays or family events, do a lot to keep people feeling connected to one another. For global workers, these spontaneous exchanges must be structured in to build trust and emotional connections.

It’s fairly easy for global workers to make a habit of using the unstructured time during the initial minutes of a meeting to initiate and join in the informal chat about non-work matters, such as family, food, and current events. Teams may also use this time to communicate openly and honestly about the invisible constraints that may exist within their firm. For example, an employee on a team may have concerns about upcoming legislation that may impact the way the bidding process works in her region. Such information may or may not directly apply to the team’s project, but it may offer some valuable insights down the line. More importantly, the chance to talk about local challenges lowers social distance by encouraging team members to feel heard and cared about.

A software developer in Istanbul kept silent in a team meeting in order to avoid conflict, even though he questioned the other team members’ design of a particular feature. He had good reason to oppose their decision, but his team leader had discouraged disagreement, and the developer did not want to damage his own position by speaking his mind. However, four weeks into the project, the team ran into the very problems that the developer had seen coming.

Had the project leader been able to do what’s called “forcing conflict,” the developer in Istanbul might have been able to save the day. Forcing conflict means encouraging intellectual disagreement for the sake of surfacing new ideas. It does not mean inviting team members to vent grievances or focus on difficult or annoying interpersonal issues. Try beginning a conversation on a positive note by saying, “I like that idea . . . let’s brainstorm more like it.” If others disagree, saying, for example,  “That’s too risky,” force people to be specific about their worries. “What scenarios are you worried about?”

The act of gently teasing out conflicts, and treating them as opportunities to learn helps to focus on the “good” differences between each person.

Global leaders can also foster trust and lower social distance by creating deliberate moments to ask for suggestions about team and company improvement. This is called engaging in “direct knowledge,” or learning about group members’ personal characteristics, relationships, and behavioral norms. While this knowledge-gathering practice is important, leaders can and must turn the tables by inviting team members to gather such information about the leaders themselves as well as about each other. Doing so invites team members to have a voice, to speak up about their concerns, and to process observations they have made consciously or subconsciously.

Rules of Engagement for Meetings

To avoid social distance, leaders must insure that team meetings follow the “rules of engagement” – to dial down dominance, dial up engagement, and balance for inclusion. (See other blog posts)

Because global teams rely heavily on technology to communicate and get work done, managers need to be as deliberate and thoughtful as can be in their choice of specific software, make sure to invest in appropriate IT training for team members, and set, enforce, and refresh norms for IT use. Failing to pay adequate attention to these issues is likely to contribute to social distance.

In general, managers who are trying to persuade their team members to take a particular course of action will find greater success if they use instant technologies at the outset, such as instant messaging, phone, or video conferencing. Managers who are less concerned with persuasion and more concerned with relaying information or ideas can communicate using delayed or asynchronous methods of communication, such as email.

Privacy, security, and transparency must also be addressed. At times, the particular technology platform may not be your choice. Compatibility issues may arise, and you can’t assume that adequate technical support exists for every location. Governments may differ in their usage allowances. In short, technology, while a boon to global work, also creates additional complexities that can, depending on how they are addressed, affect social distance. 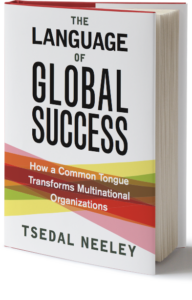 To learn about how global teams can communicate most effectively in global organizations, read The Language of Global Success, available now at your favorite book retailer.